The brand new changing facilities at Dursley Rugby Club have been officially opened by players.

The £500,000 project is the biggest single investment in the club’s history and will allow junior and senior teams, male and female to use the facilities at the same time.

The new facilities were built following a three year fundraising campaign by the club, with donations from members, individuals and grant giving bodies keen to invest in the community facility.

Dursley rugby players of all ages and members of the Dursley Running Club, cut the ribbon in front of more than 200 members and guests on Saturday 22nd April. This was followed by a league match for Dursley 1st Team v Southmead and a cup semi-final for Dursley 2nds v Cirencester – in which both Dursley teams were victorious.

The new changing rooms were built by contractor E G Carter and will provide three times the space for the 500+ players and runners who use Dursley Rugby Club and offer self-contained changing and showering facilities. 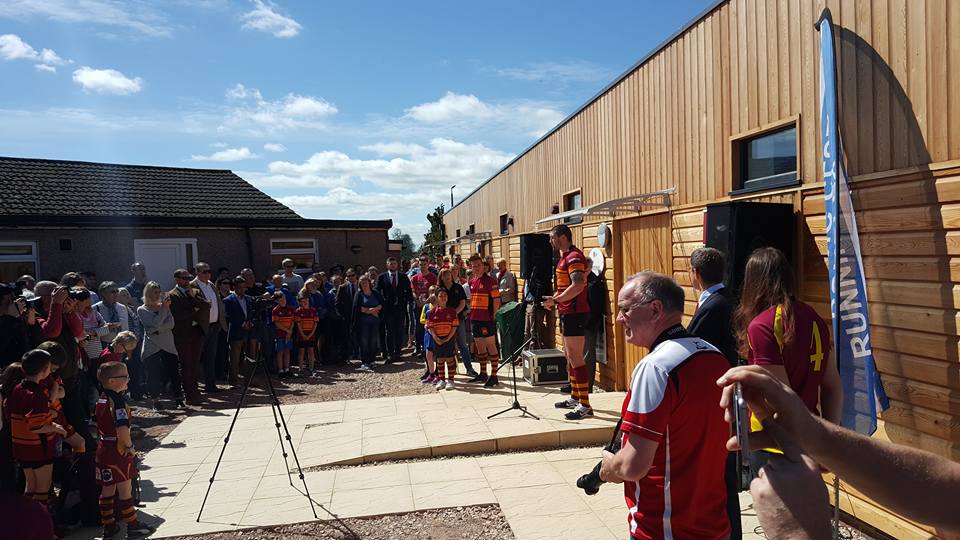 Dursley RFC Club Chairman Simon Bilous said: “What a great turnout for a big day for Dursley Rugby Club. We can now provide decent facilities for all our members, and most importantly continue to strengthen our junior, girls and women’s teams as well as the expanding Dursley Running Club.  Our success as a club – which includes winning a hat-trick of senior cups last season and producing two England players - has out-stripped our poor changing facilities. This new building will be something the whole community can be proud of.”

The official opening presentation was run by John Darlaston, Club President and Simon Bilous, Club Chairman. The ribbon cutting involved Josh Holloway from the U17s and Talia Tongauiha from the U7s;  Jack Robson, Club Captain and Katie Thomson, Ladies Captain. From the Running Club were siblings Olive and Charlie Jones and James Drennen.

The club would like to thank Alan Smith and Smiths of Gloucester for their continued support as well as individuals who made contributions to the project. The club also received financial and grants support from the following organisations; Rifina, Kohler Mira, Magnox, and Geo Tech. Gloucestershire Playing Fields Association, Gloucestershire County Council Active Together, Sport England, the Rugby Football Union and Rugby Football Foundation, the Gloucestershire Environmental Trust and Summerfield Charitable Trust and Dursley Running Club.