Tough away win at Bredon

It was a cold and blustery day as Dursley travelled to Bredon for what has been a bogey side for the Dursley side over recent years.  It is always a close encounter and this match was no different.

The opening started well as Dursley outside centre Chris Perrett made a good break down the left hand side of the field after some good forward play by captain jack Robson and the ever present Simon Camm.  The ball was re-cycled to the backs and Duncan Goodison put Bradley Winchle in at the corner.  It was a touch and go thing as Winchle danced close to the touch line but it was deemed a try and Dursley were 0-5 up after as many minutes.  Fly half Grant Boucher failed to convert from the touchline in the blustery conditions.

The next 10 minutes saw the Dursley side dominate both in the set piece with the front five of Damien Crosswell, Joe Cowley, Ty Chappell, Silas Winterbottom and Jack Western, as been the case all season, and then with the ball in hand.  The backs, who were well marshalled by Sam Pinker at scrum half and fly half Boucher, often made good ground only to be thwarted near to the try line. However, Boucher was given a number of opportunities to convert penalties in this period and he slotted one from a mid field infringement to take the score to 0-8 .

This shook the home side into a concerted effort to get back into the game and after a lengthy period of possession they were camped deep in the Dursley half.  Good sustained pressure by the Bredon backs forced the Dursley defence to creak a little and offer up penalty chances to the Bredon fly half, one of which he duly slotted to take the game to 3 – 8.

It wasn’t long though after a number of silly mistakes by Dursley gave the home side had another chance to bring the game to 6-8.

Just before half time, Boucher was given another chance at goal after a good break by winger Ollie Halford and then Perrett as the home side were deemed off side at the break down.  Boucher slotted the conversion as the half time whistle went bringing the game to 6-11 to the visitors.

The second half started much like the end of the first half, with the home side performing well with the ball when they had it but finding it increasingly difficult to get it away from the dominant Dursley pack.  The lineout had been a strong weapon for the visitors during the first half and it proved the same in the second, taking the ball and driving repeatedly into the Bredon half before the ball was either spilled or a penalty was given up at the breakdown.  However, from one of these drives the home side were deemed to have infringed.  Boucher duly kicked to touch in the corner.  This time the drive wasn’t so well judged but the visitors did win a 5m scrum.

It was a formality then for the front five to drive with the ball, well controlled at the base by the skills of Camm, who duly touched down.  Boucher slotted the conversion to leave the visitors with a comfortable 6-18 lead.

And so it was for the next 10 minutes or so.  The Dursley dominance was growing at the set piece and in the loose until the second replacement prop for Bredon was injured on the 60-minute mark and the referee declared that the scrummage would become uncontested.  This turned the tables as the previous dominance at the scrummage was nullified.  The Bredon side gained the ball at their own put in and so managed to make ground.  Finally the Dursley defence gave way and the Bredon winger scored in the corner.  This was essentially the last play of the game to leave the visitors with an excellent win against this very difficult opponent. 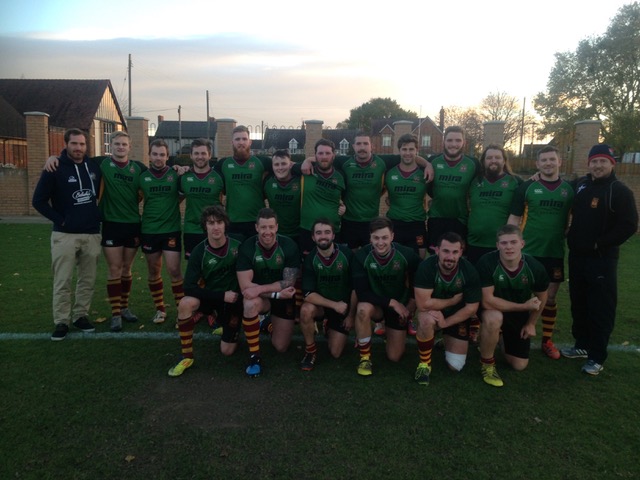