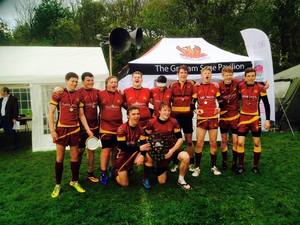 With cohort numbers diminished for multitudinous reasons, a brave few made the season ending pilgrimage to the settlement of Corinium Dobunnorum and the battlefields sited near the ancient Fosse Way for the annual Corinium VII's

Evidence of the ferocity of battles that lay ahead were only to clear to see from fallout from the ensuing battles raging. Play suspended on battlefield 2 for medics to tend to an injured Legionarius from the Ledbury tribe. Play suspended indefinitely on battlefield 3 within minutes of arrival to tend to Carolus Astonius, a brave Legionarius of the Dominus Dursley X111 sub cohort.

Within the mandatum tabernaculum it was shown our valiant cohort’s battles on the day were to include Ledbury (near Viroconium Cornovorium), Minety (near Cunetio), Wallingford (near Sulloniacae) and Corinium Dobunnorum.

Dursley took to the battle ground against a determined Minety team and the cohorts numbers were swiftly reduced following an injury to Legionarius Andreas B. At a time when the politici of Britannia are using our NHS as a battleground of their own we can report that this wonderful institution is holding its own - Legionarius Andreas was transported to the local A&E, triaged, ear glued back to the side of his head and returned by Mater Amandus in under 2 hours – well inside the target 4 hours mandated. Omnes Speciosa! Down to 11 brave now, Dursley were comfortable winners of their first battle.

Ledbury, who were victors in the annual festival of legions last year, were despatched but not without further injury worries to Legionarii Nosson A and Carolus L, who in spite of scoring twice, looked the very vision of death. After a series of try saving tackles Iohannes B suffered from a head case incident and had to be replaced and was to unfortunately not re-enter battle for the rest of the festival. The cohort was shrinking rapidly – 10 strong now

Tough opposition lay await in hosts Corinium Dobunnorum who came to defend local honour only to be edged out in a tightly fought encounter.

The last round of the pool round was against Wallingford who had shown that they were to be worthy adversaries also winning all their battles to date and it appeared with greater ease. The opposition swiftly ran out to a 2 try lead before injury to Legionarius Henricus M halted proceedings. The opposition ran in another unanswered try leaving our fine band reeling at half time. Caesar Glendonius offered hope and cautioned against capitulation and the cohort rose valiantly to win the 2nd half 2-0 – a loss but pride restored.

And so after the preliminaries the final battle to decide the war was to be Wallingford (near Sulloniacae) vs Dominus Dursley. Cometh the Hour Cometh the Man (as Our Man so aptly phrased it on occasion). The Dursley Cohort went out with a plan to kick in behind their opposition and to defend for their lives. The execution of the battle plan was heroic and exact and in an extremely rugged encounter our Legionarii prevailed to lift the winner’s trophy assuring them an invitation to defend the Dursley honour at next year’s festival.

Our thanks to our hosts for what has always proved a perfect end to the season – good rugby played in the right spirit.

Best Use of Glue: Ear to Head Repair

Other Notable Victors: Dursley U15 and Dursley U12