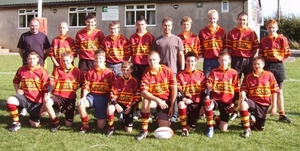 Despite losing heavily there were many positives to be taken from this game. The forwards dominated large sections of play, being unlucky not to score on several occasions and the back line showed far greater defensive organisation than has been evident previously.

At times, Hucclecote appeared able to exploit nearly every mistake made by the visiting team. Dursley made some great cover tackles to prevent an even more unfortunate scoreline.

Special mention to the 'new boys', Alex Hall and Olly Allen, for surviving with honour this tough introduction to Dursley rugby.

The Hucclecote coach summed up the game when he said 'This is never an easy game despite the score. Dursley never give up, it's a battle all the way', which is indicative of the great character displayed by this enthusiastic team.