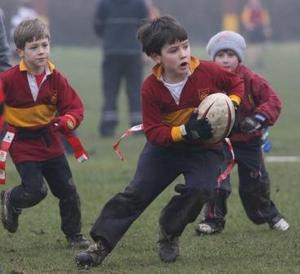 On a bitterly cold morning, 19 under 8 rugby players travelled to Cleve RFC. Cleve’s wonderful facilities presented a fitting back-drop to some very entertaining and skilful rugby from both sides.

Dursley Lions, on an 8-match winning streak, played some champagne rugby in the first match of the morning. Tries from among others Richie Matthews and Christopher Colston, kept coming as the Lions racked up 8 tries in perhaps their best performance of the season. Safe handling, electric pace and a solid, reliable defence meant that Cleve were never able to break down this very impressive Lions side.

Game 2, saw Dursley Tigers return to form. After chastening defeats against Gordano last week, the Tigers, with a number of players returning from injury, turned in a bravura performance scoring 4 brilliant tries, including 2 from Silas Winterbottom. Cleve came back well with 3 tries of their own but couldn’t prevent the Tigers claiming a well deserved victory.

The final game of the morning saw a 10-a-side match between Cleve and a combined Tigers and Lions team. The game was not as free flowing as the first two of the morning but still saw some great tries including a strong run to score from 15 yards inside his own half from James Cope. Good defence from Finlay McCubbin, Mason Jakuta and Dominic Webb restricted Cleve to a single try and Dursley ran out 3-1 winners to cap a very successful Sunday morning. ~Bring on the County Cup!!!