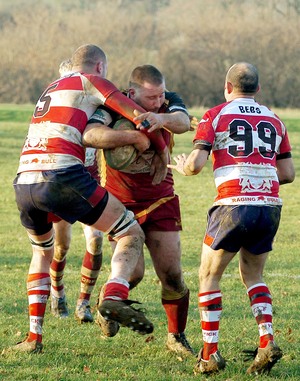 This top of the table clash saw both teams go into the game level on points, with the victor sure to move clear of the other in the league table.

Dursley started well and were awarded a penalty within the first couple of minutes, which Boucher just pushed wide. Painswick then came back at the Dursley team and were awarded a penalty of their own, which was converted to give them a slender lead 3-0. Dursley remained strong and good defence by Robson and Budd making an impact on the Painswick players. A good break by winger Max Pullin put Dursley deep into the Painswick half but a lack of support saw them loose the ball. Painswicks adventurous play saw them stretch the Dursley team who’s scramble defence just prevented a score for the home team. However, from the resulting scrum the ball squirted out, was gathered by Painswick who spread the ball quickly to score the opening try in the corner, the difficult kick was missed making the score 8-0. Dursley for a team who were still unbeaten in the past 6 games were looking off the pace and out of sorts. This was the story of the remainder of the first half with Dursley scrambling to keep Painswick out, only good work on loose ball by Budd and Billett regaining and maintaining possession for the Dursley team. However, they were able to get through to half time only 8 points down after a very average first half performance.

The second half saw a complete change in Dursley’s effort and application and within 5 minutes of the restart cut the deficit by three points after a confident penalty shot from winger Ed Sheldon. Painswick still offered a threat and only a last man tackle by Full-back Joe Bilous prevented a Painswick score. The Dursley forwards were now in the game and they managed to rumble yard after yard, sucking in the Painswick defenders allowing returning Broomfield to cut a hole through the defence, but the final pass was knocked on, a lucky escape for the home team. Dursley kept the pressure high and good carries by Steel, Robson, Udal and Camm kept the pressure up. Finally after a well-worked short side move and slick hands saw Jake Martin bosh his way over for a score in the corner, leveling the scores at 8-8 once again the difficult conversion was missed, keeping the scores tied. The momentum really was with Dursley now and they spent the final 15 minutes camped in the Painswick half, this made the game very scrappy as the home team did everything to try and keep Dursley out and for a long time were successful. The pressure was finally too much and Dursley were given a penalty with the play of the game giving them a difficult shot to win the game, Ed Sheldon stepped up and was unlucky to see his decent strike just drift wide of the posts, resulting in a tied game 8-8, which didn’t really suit either team but both knew it could have been worse.