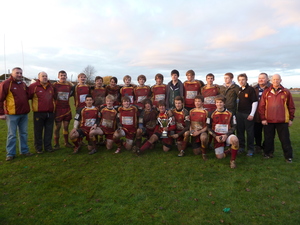 Having come top of their respective pools, these two sides met at Old Richians to contest the final of the U18 league with some billing this as the best attack in the county against the best defence.
Cirencester got the better of the early exchanges and although they put their first penalty kick wide, they opened the scoring when Dursley conceded another penalty for not rolling away. Dursley gradually played their way into the game and with Jack Weston stealing line out ball repeatedly, Dursley were able to get on the front foot. After a spell of constant pressure they won a scrum in their opponents 22 and from the next two phases a quick ball taken at pace by Tim Wilcox saw him shrug off a couple of tackles to score. A difficult conversion missed kept the scores close at 5-3. Patience proved vital as Dursley attacked again and as the forwards sucked in their opponents, a quick ball fired out across the backs allowed Liam Williams on the wing to score. Ed Sheldon kicked the conversion from a difficult position to give Dursley a 12-3 lead.  A further penalty from Cirencester brought the score back to 12-6 at half time. As expected Cirencester came back out fired up, as Dursley's defensive qualities were put to the test. On a rare visit into the opponents 22, Dursley came close to adding a further score but just failed to get over the try line. Any long balls kicked ahead by Cirencester were ably dealt with by Ed Sheldon and Liam Williams. With injuries to a number of players, Jack Weston and Jake Winterbottom were drafted into the squad for the day  from the U17s and both acquitted themselves well. With Both Ryan Akhurst and Tom Crosby hobbling off injured, a nervous last quarter ensued,  but all 15 on the pitch defended magnificently and held firm to lift the trophy and helped Charlie Bennett and Andrew Dinnage celebrate their 18th Birthdays in style.