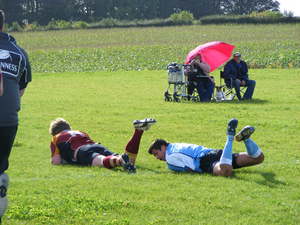 DURSLEY FIRST XV v KINGSWOOD
Saturday 2nd October
Final Score 31 –28
Following heavy rain on Friday Dursley welcomed Kingswood, who had been promoted from last season, in bright sunshine and a strong wind. Dursley were hoping to turn in a performance that would put them back at the top of the league and they were not disappointed although they had to work very hard for it.
Dursley made a strong and confident start getting an early penalty which full back Grant Boucher kicked to touch for a 5 metre line out but Dursley were unlucky not to capitalise. A good break by centre Darren Sampson along with pressure from prop Darren Noble and second row Graham Dakin and a pick up of loose ball by scrum half Henry Pullin set Dursley up for a scrum just inside the opposition 22. From the scrum, on 14 minutes, Number 8 Tom Stevens collected the ball to break through the middle of the defence to score the first try but Boucher failed in the long conversion. Good tackling from Boucher and winger Tom Pinker kept the Kingswood attack at bay with the Kingswood scrum half leaving the field due to injury at 27 minutes. Three minutes later Kingswood were awarded a penalty just on the 22 and with the wind in their favour brought the score to 5-3. A break from an excellent line by fly half Andy Sprague was thwarted and the return kick over the top set Kingswood up for their first try which went unconverted on 35 minutes. Despite strong tackling by flankers Mark Perry and Tom Broomfield Kingswood added to their score with another unconverted try and a penalty for alleged off side bringing the half time score to 5-16.
The second half began with Raoul Moore replacing George Sheldon at hooker and Gareth Udal replacing Pinker on the wing. Again Dursley started strongly with a penalty from Boucher in the first minute that skimmed just wide. Despite some excellent scrummaging from the home team and a strong run from Udal and centre Joe Atkins Kingswood continued to pressure and after 9 minutes were rewarded with a penalty try and a conversion in front of the posts widening the gap to 5-23. It was at this point that Dursley got the bit between their teeth and the Dursley pack made a 20 metre drive to win a penalty. From the resulting line out taken by second row “velcro hands” Mike Kerr the pass set up a crash over try from captain prop Ben Brinkworth with Boucher adding the conversion. Dursley continued to dominate and desperate to close the gap both Boucher and Pullin had failed drop goal attempts. Midway through the half Brinkworth added another crash over try with Boucher converting and the score line now 19-23. Kingswood continued to battle and with 10 minutes left to play added another unconverted try to their tally and Andy Plumridge replaced Dakin.. Dursley were now firmly camped within the opposition 22 and Kingswood made errors resulting in a yellow card for one of their players and 2 penalties which Dursley chose to scrum with the second resulting in a try by Sprague with Boucher converting. With full time looming Dursley lost the ball 5 metres out giving Kingswood a life line but they won the scrum against the head and from the recycle set Brinkworth up for this third crash over try which went unconverted but brought the final whistle and the scoreline 31-28
Coach Andrew Sharp said that the team had a couple of purple patches, being the first and last 20 minutes.
Star man: Ben Brinkworth 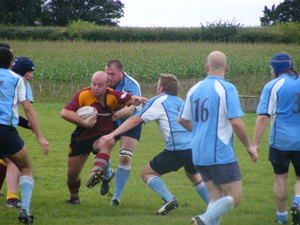 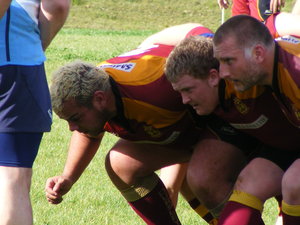