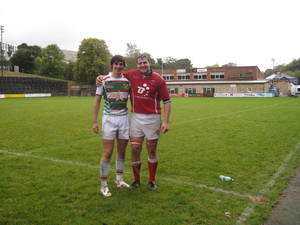 Dursley Export Players to Wales
Two Dursley Players meet on the rugby fields of Wales this Saturday to face each other for the first time since they played together at Dursley RFC.
With both Oliver Halford & Ben Morgan being the products of the very successful mini & youth section at Dursley RFC.
Both players have tasted life at the top of the youth game with Ben Morgan playing and winning twice at Twickenham with the Gloucestershire U20s county team and Oliver Halford playing for Newport Dragons U20s.

Now with Oliver playing for Ebbw Vale and Ben playing for Llanelli Scarlets, they meet in a very tough match on Saturady.
Ebbw Vale 25 v Llanelli 19
A huge cheer greeted this long awaited win at Eugene Cross Park for Ebbw Vale. The match was decided in the final minute, The lead changed hands nine times, Stop-start though the game turned out to be, the crowd was entertained by the goal-kicking battle. Bowen got the Steelmen off to a cracking start, slotting over penalties in the 3rd and 8th minutes to give Vale a steady start. Richards pulled one back for the visitors after sixteen minutes, but Bowen got in the act again in the 32nd minute, putting over his third penalty to keep Vale’s six point advantage.
The kicking battle was disturbed on the half-hour as Llanelli No 8 Ben Morgan crashed over for Llanelli’s only try, Richards converting to give the visitors a one point lead. But three minutes later Bowen put over his fourth penalty to put Ebbw back in front by two points.
Half Time: Ebbw Vale 12 Llanelli 10
The penalty count and the kicking duel continued in the second half, the lead changing hands five times as Bowen and Richards kept slotting their penalty chances at regular intervals.
full-back Andrew Williams took an inside pass at pace, side step the one defender in his way and score under the posts, Bowen converting this last gasp try to give Vale a well-deserved victory.
Final Score: Ebbw Vale 25 Llanelli 19
Oliver Halford said “ It was great to play against Ben and I think he played very well but we just edged it in the end”
Ben Morgan said “They just managed the breakdown better than us, it was good to play against Olli in such an important game for both clubs”
Both players expressed their thanks to Dursley RFC who have put so much in to Mini & Youth Rugby over the past 15 years.