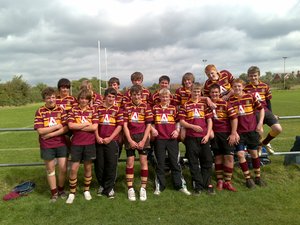 As a season opener Dursley RFC U16’s took part in the inaugural Wotton Bassett Under 16’s 10’s tournament and came away champions. Dursley started strongly against Fairford, with Akhurst, Caddick and Perrett all scoring in the 1st half. Vick, Rowe, Bennett and Perrett added further tries for a comfortable 49-0 victory.  Newbury provided stronger opposition in the 2nd game and although Sheldon opened the scoring for Dursley, Newbury soon levelled the scores. Good work by the forwards created space for Smith who drew his man and put Dinnage away to score. With both sides cancelling each other out for long periods of the game, the deadlock was broken with only a minute remaining  as Sheldon jinked his way through the defence  to give Dursley a 21-7 win. A final game against the home side saw the forward control loose ball and the backs move the ball at pace. Wilcox, Akhurst, Crosby, Bennett and Sheldon all scored tries as Dursley won 49-0. A trophy was good reward for the teams effort to which Haywood, Watson, McKay  and Camm all played their part. 17 tries with only 1 conceded  creates a strong platform for the season ahead.