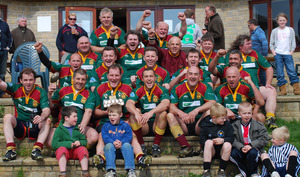 Dursley Nomads (3rds) finished strongly to win this hard-fought contest, in the end with the convincing scoreline of 32-18.
However, despite the scoreline, the match was very much in the balance well into the final quarter.
The battle of the packs was a major defining element of the match. From the start it was clear that Dursley had a significance edge in the scrum, using their experience to good effect, whilst Cirencester dominated the line-out. The battle for primary possession would be the key to the outcome.
Dursley started the stronger, with their pack dominating territory, but the early pressure went unrewarded, with 2 missed attempts at goal.
After 15 minutes, the battle for possession erupted into a small fracas, which resulted in the Cirencester No 8 being sent to the bin. However, Cirencester then gained some territory and took the lead with penalty kick for offside.
Dursley struck back, surging into the opposition half, and with scrum-half Tom Lister kicking intelligently for position, No 8 and skipper Darren Butcher drove over from 5 metre scrum for the first try, with Tony Powell converting.
From the restart Dursley continued in attacking vein. A loose Ciren kick was gathered by centre Alan Ball, who set off on a rampaging run from 50 metres, brought down just short, with Lister just unable to hold the pop pass. Nevertheless, Dursley took control from the scrum, and after good approach work, Powell bamboozled the defence with a dummy and neat chip for wing Darren Sampson to gather and score wide out.
Cirencester, now back to 15 players, then put together some phases, and after sustained attack, worked an overlap for their No 8 to score at the stroke of half-time leaving the match finely poised at 12-8 to Dursley.
The second half saw Cirencester camped in the Dursley half for the first 20 minutes. Excellent defence eventually broke, with a penalty try being awarded for a high tackle, being duly converted. With the wind making kicking difficult, Dursley tried to run out of defence, but still struggled to reach the heights of the first half. Ironically it would be a Ciren penalty that allowed them to break out of their half from the restart, and with Cirencester losing their key lineout jumper through injury, Dursley then dominated territory and possession for the reminder of the match.
Sustained pressure saw neat handling for Phil Moorsom to score wide out, followed by a remarkable hat trick of tries from centre Alan Evans in the last 10 minutes. One followed a magnificent canter up field from Butcher, and the final try came from an outrageous dummy from Powell in his own half, great support work and vision from the supporting Lister, who put in a beautifully weighted chip for Evans to chase.
All in all, an excellent advert for 3rd team rugby, and thoroughly deserved reward for the Dursley side. 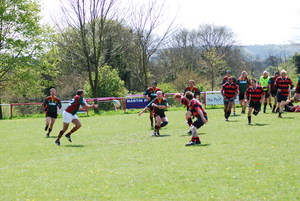 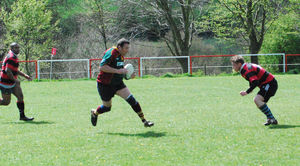