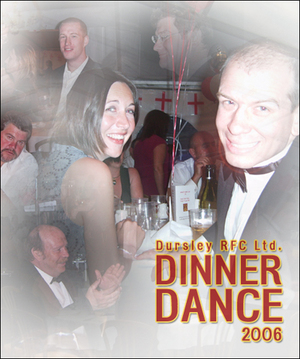 More than 180 people attended the annual rugby club dinner dance on Friday 9th June – a record turn-out for what all agreed was the best yet.

It was also a first for another reason – being held in the marquee at the club’s Stinchcombe Stragglers home ground.

In glorious evening sunshine, the crowd of members from all sections of the club entered into the spirit of the event by taking heed of the ‘black-tie’ dress code making it a real spectacle.

Thanks to the sponsorship of Whirlpool , it was also an event that helped contribute to the fund-raising effort of the club as it’s continues to progress it’s development plan, along with the help of the recent loan from the RFU for land purchase.

The success of the club’s season was celebrated, recognising the achievements across the mini and junior age groups, including the u8s success as , through all of the age groups to the u17s being county runners up and South West Bowl Winners.

With an impressive number of players also representing district, county, and academy teams and England B and full England International honours at u16 level (the first full honours for the club through the outstanding achievement of Oliver Winterbottom) the future certainly looks bright for the club.

Not wanting to be outdone, the men’s teams all had a good season, and the 1sts, 2nds and 3rds all reached their respective combination cup finals. The Dursley Ladies also re-established themselves, helped by a successful recruitment drive.

The total list of honours is summarised in the attached table.

The evening also included the annual presentations for the senior men’s rugby awards, as well as the awards for outstanding contribution to the welfare of the club as a whole.

Clubman of the year went to Mark Perry who is standing down after 2 years as club captain, in recognition of his commitment over this time, and the Jack Heaven memorial trophies, presented in memory of the club’s late-President for outstanding service for Senior and Junior rugby, went to Roger Batty and Bill Grant respectively for their huge efforts in progressing the club’s development plan.

Thanks to a combination of good food, ale, wine and company the evening was a great success with dancing into the night.

Thanks were expressed to event organiser Lorraine Hollingworth for her sterling efforts which made it a real night to remember.