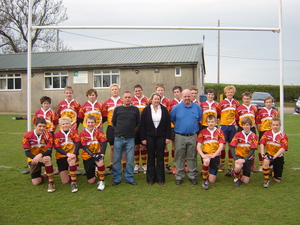 Dursley RFC – U15’s Match Report
Match Date: Sunday 15th June 2008
Opposition: Various
Venue:          Three Counties Showground
The rugby season never ended for Dursley RFC U15’s, who have continued training well into the summer, playing Touch Rugby. This version of the oval ball game, although without the tackles, scrums, rucks and mauls of its fifteen a-side older brother, does provide a flowing, fast paced game, which is enthralling to the spectator and player alike. The Yew Tree sponsored Dursley side were previous winners of the same competition last year at U14’s. This time however they faced stiffer opposition, all better trained in the art of Touch Rugby than ever before.
Playing Matson first, unfortunate forced errors caused the Dursley side to gift Matson with two interception tries. A final score-line of 3 tries to 4 for Matson left the Stinchcombe based side decidedly deflated.
However in their next match versus Ledbury the team drew together, finishing a strong winner 6-1. A short lunch break re-charged their batteries further, allowing them to firstly beat Widden Old Boys 5-1, then Gloucester Girls Junior Talent Squad (a GRFC sponsored team) 8-1. A last match against Old Richians was won 5-0, allowing Dursley to qualify for the grand final against Matson – the re-match they deserved.
The final started with Dursley drawing first points, but Matson fought back to equalise. So the game continued until Dursley drew ahead 4-3 at the final whistle to win. At the subsequent presentation ceremony, besides medals and the Touch Rugby Tournament winners trophy, they also received £250 in Rugbytech products.
A tally of 31 tries over six matches saw top points going to Ed Wooldridge on 7, closely followed by Tom Walpole (capt) and Andy Monyard on 5 with Josh Bailey on 4. Providing the rest of the tries fell to Ollie Meikle, Simon Thomas, Rory Chappell, Max Pullin, James Page and Mat Rose.