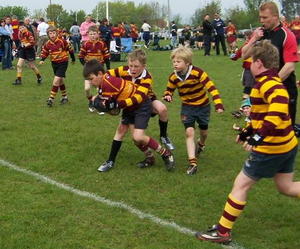 Under 10's win all games at Thornbury Festival

Dursley RFC U10s were amongst 5 teams contesting the tournament. Fresh from their successful Welsh tour, Dursley started in top gear against Frampton Cotterell scoring 2 tries in the first 2 minutes through Wing Stanley Moorsom. They went on to win the game 4 tries to nil.

The next match was a very competitive encounter against hosts Thornbury. The two teams exchanged 2 tries a piece in the first half, but Dursley showed their superior handling and pace to come out winners 5-3. Try scorers included Chris Colston and Greg Penlington.

Game 3 was against St Brendans. The two sides had never played before but it was obvious that they both wanted to play a fast paced game with some great handling from both teams. Dursley always looked like winning the game as they repeatedly crossed the St Brendans line with tries from Finlay McCubbin (2), Cameron Caddick and Chris Colston to come out winners 4-1.

With results elsewhere meaning that Dursley had already won the title, coach Angus McCubbin used his whole squad in the final game against Keynsham. This didn’t seem to phase the Dursley players however, as they once again threw the ball around, scoring a further 5 tries to take their try count for the day to 18, twice the number of their nearest rivals.