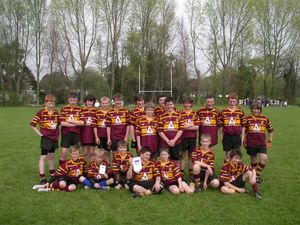 After two days of hard, fast and full on rugby, against some big opposition, Dursley won four matches and narrowly lost 2 by the closest of margins.

The first game was a hard fought match narrowly lost by one try.
In second game Dursley edged ahead to a 10-0 half time lead and although pegged back to 15-14 eventually pulled away to win 27-14.
The last match of the day against Bicester saw Dursley forwards dominate a much bigger pack winning scrum after scrum against the head, to put the backs away and ease to a 27-5 victory. The highlight being three excellent passes out of the tackle in quick succession to result in a try.
The next day Dursley started slowly and found themselves being held 0-0 deep into the second half before sustained pressure from the forwards eventually led to two tries in quick succession to win 12-0. Their next opponents, Heathfield and Waldron found the pace of the Dursley backs too much as they succumbed 38-0. The final match against Bromsgrove would decide the tournament winners. With little to choose between both sides Bromsgrove scored first, but just before half time Dursley were awarded a penalty try to take a 7-5 lead. With Bromsgrove pushing the line they took advantage from a kick forward to put the full back under pressure and score in the corner to take a 10-7 lead.
Although Dursley fought on they just couldn’t get the score they needed despite the encouragement from the travelling supporters.
Nevertheless the whole squad played magnificently as a team and were complimented on their style of play.