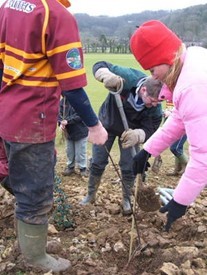 Rugby boots to be traded for wellington boots as Dursley Rugby Club prepares to plant 2,620 new trees on site.

While the heaving of scrums and enthusiastic cheers are all familiar sounds at Dursley Rugby Club, Sunday 20th March will hear the scrape of shovels and the rustling of leaves added to this flurry of activity. Three years ago Dursley RFC purchased an additional area of land in order to improve its training facilities. While pandemic has delayed plans to prepare the land for sporting use, the club are finally able to progress with the next stage of development. The latest phase of the project will see over 2,620 new trees planted around the perimeter of the land. These new trees will develop into a hedge system which will improve the aesthetic, encourage more biodiversity, and provide greater privacy for neighbours.

The new trees have been secured with the help of Woodland Trust and Glosclimate, and care has been taken to ensure the species mix is best suited to the site and the local wildlife. The new hedge will provide an important source of food and refuge for birds, insects and small mammals and strengthen the club’s existing conservation efforts.

In addition to helping wildlife, the planting of new trees on site will also contribute to the fight against climate change. Estimates suggest that these 2,620 trees alone could remove as much as 26,200 kilograms of carbon from the air each year. Dursley Rugby Club’s tree planting project will also count towards the goals set by Gloucestershire County Council to plant 1 million trees in 2022, and will also be included in the Woodland Trust’s pledge to plant 50 million trees in their Big Climate Fightback.

As an additional aspect of the planting initiative, Dursley Rugby Club are also offering its friends and supporters the chance to sponsor each of the new trees with a personal message or dedication. The money raised from these sponsorships will be placed into the club’s development fund and reinvested in future projects, including the installation of solar panels.

The planting event on Sunday 20th March will see past and present players from the Mens, Ladies and Mini & Youth rugby teams pitching in, as well as members of the Running and Cricket clubs. Several participants from the 2008 planting project will also return, including the now 24yr old Fin and Cam (shown in the picture below) who are excited to be a part of this next step in the club’s development. Additional volunteers are always welcome, and further details about the planting sessions can be obtained from Angus McCubbin (glosflyhalf@googlemail.com) 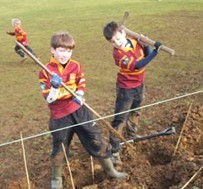