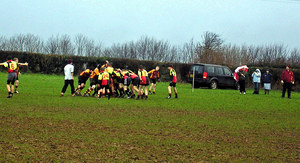 With a strong wind at their back, DRFC U14’s took early advantage from pin point accuracy kicking of a penalty between the uprights by No. 8 Max Pullin from far out left field. Continuing his successful season for Dursley, Mike Beswick at centre followed on with a try minutes later, converted by Pullin again.

Despite the 10-nil lead at half-time, Bredon fought back scoring straight away to bring them within three points. Beswick produced another to advance the Dursley lead, but again Bredon came back in retaliation. The slim margin looked to be the final result, but for some inspiration vision by wing Ollie Meikle. Catching the knocked-on ball from the Bredon centre following a ill thought out penalty just ten metres out, Meikle broke through the defence to take the final try of the match.

With a scoreline of 20-12 Dursley can be well pleased with yet another improvement in their performance.

This weekend sees the start of a difficult campaign for Dursley U14’s, with their first draw at home to Hucclecote RFC.